On young trees one leopard moth caterpillar is enough to kill a tree. Old trees are severely damaged, particularly in periods of drought. 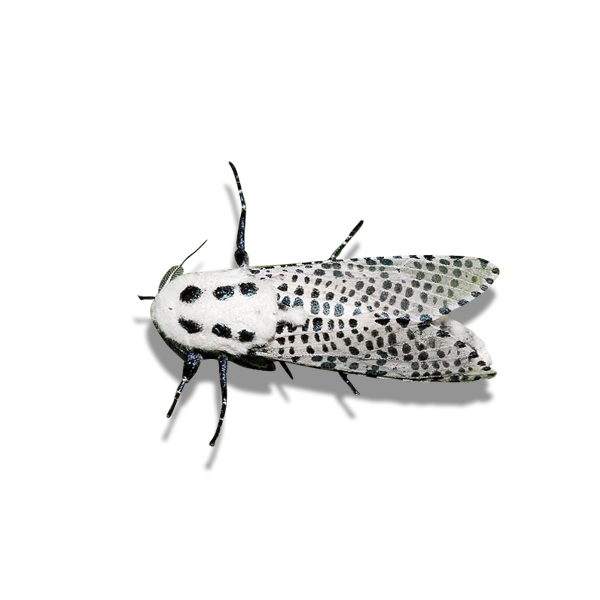 Leopard moths have a general wing span of around 35-60 mm. Adult are stone –bodied, fluffy moths with coal black spots on white wings. The appearance of the wing pattern is similar to a leopards markings, hence the common name.

The larvae feed on the wood of a variety deciduous trees and shrubs, causing irreparable damage. The young caterpillar can be carried by the wind attached to a silk thread.

The seriousness of attacks varies according to the age of the plantation, on young trees one caterpillar is enough to kill a tree. Older trees can lose part of their structure and integrity, resulting in trees that are more vulnerable to wind damage. Old trees are severely damaged, particularly in dry years and dry ground.

Damage caused by Z. pyrina tends to be more significan following warm, dry periods. Trees weakened by leopard moth attacks are more susceptible to damage from other pests, including the goat moth (Cossus cossus), hornet clearwing moth (Synanthedon myopaeformis) and bark beetles. The woolly aphid (Eriosoma lanigerum) can use the old galleries mined by the larvae of Z. pyrina as a refuge, enabling them to evade chemical treatments.

Lures Handling
Pheromone lures are a very sensitive tool. They can be affected by exposure to high heat and direct sunlight. Direct contact with the hand may cause cross contamination leading to mixed catches in the trap. Some pollutants such as nicotine may have repellent effect of reducing trap catch.

Lure Storage
Store the pheromone in a cool, dry place. Service life may vary from 3-36 months depending on the storage temperature. See data sheet for details

The Delta trap is most sensitive trap to use for monitoring this insect. However, Moth catcher may be used in dusty condition or in high moth population density. Do not re-use the trap to monitor different insects as this may lead to mixed catches.

Two traps per hectare (2 traps/ha) for small holdings and in field of uneven topography. One trap for every two hectares of large scale fields of homogeneous lands.

Near the highest point of the plant using supporting posts approximately 1 metre high, or higher if the crop is higher.

Collect data weekly from the start of the flight of the over wintering generation. During the height of the population more frequent reading may be needed. Decisions on pesticide application should not be taken solely on the trap catch data.  Climatic and biological considerations should be taken in account.

The study examined the nature and scale of damage caused by the leopard moth in Egypt. The infestation of four susceptible and five resistant olive cultivars in different cropping systems was varied within and between adjacent plots. The results suggested less infestation by intercropping of resistant varieties, which could assist in Zeuzera pyrina management. It was concluded that both temporal and spatial changes acted to strongly influence population dynamics and these are related to variations in the moth host plant.

Leopard moth (Zeuzera pyrina) damages various economically important fruit trees, especially walnut and apple trees. Pheromone traps in orchards of walnut is one of the most effective methods for pest control. During 2011 to determine the best type and colour of traps (including: green, yellow, white, grey and white pinto) and the most efficient trap size, various samples were compared by factorial with completely randomized block design in Khorasan Razavi. The results of data analysis showed that there was no significant difference between treatments.