The fruit tree tortrix moth, Archips podana is one of the major pest of apple.

This species occurs significantly in Bramley orchards (Mowat and Clawson, 1996). 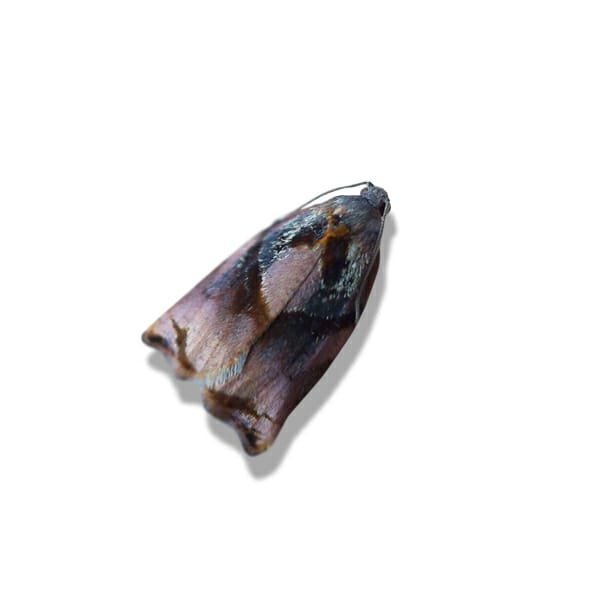 Eggs are laid in several batches of 50-100 eggs on the upper surface of leaves during June and July. The egg mass is covered with a wax-like secretion that so closely matches the green colour of the leaf that detection is difficult. Hatching occurs within 17-23 days.

Larvae disperse after hatching and, while young, each one lives in a silken web placed beside the midrib on the underside of a leaf. The new generation larvae may cause further damage to the apple fruit before they hibernate. Larvae taken into apple stores can even continue to feed on the fruit. Some of the larvae of the new generation hibernates after moulting once or twice; others develop to maturity and give rise to a second generation of moths in September and early October. The moths hibernate as young larvae in cocoons fixed to twigs or buds. These emerge in spring over a fairly long period from late March to early May.

Pupation occurs in late May to early June inside leaves that have been spun together by the larvae. The adult moths appear mid-June and are found until mid-August. The greatest numbers appear in late June or July, dependent on weather (Andrew et al., 1997).

In Europe, A. podana is considered one of the most abundant and damaging tortricid species occurring on fruit crops (Alford, 1999). The leaf rolling larvae damage the fruit of apple, pear, plum, blueberries, cane-berries and other plants, and feed on the leaves of many forest and ornamental trees, including maple, oak, elm, walnut, birch, hawthorn, and others (Lagasa et al., 2001).

Pheromone trap data gives early warning of the infestation and also exhibits the density of the insect population.

Pheremones
The following notes are guidelines of general nature and meant to give the user a head start in implementing pheromone monitoring programme. Local conditions and practices can vary and can lead to customisation of the programme.

Trap selection
The Deltra trap is the most sensitive trap to use for monitoring this insect. However, Moth catcher may be used in dusty conditions or in high moth population density.

Do not re-use the trap to monitor different insects as this may lead to mixed catches.

Trap Density
Two traps per hectare (2trap/ha) for small holdings and in field of uneven topography.

One trap for every two hectares of large scale fields of homogenous lands.

Place trap near the highest point of the plant using supporting posts approximately 1 meter high, or higher if the crop is higher.

Collect data weekly from the start of the flight of the over wintering generation.. During the height of the population a more frequent reading may be needed. Decisions on pesticide application should not be taken solely on the trap catch data.

Climatic and biological considerations should be taken in account.

Lures can be changed every 4-6 weeks to get the most accurate results.

Pheromone lures are a very sensitive tool. They can be affected by exposure to elevated heat and direct sunshine. Direct touching by hand may cause cross contamination leading to mixed catches in the trap. Some contaminants such as Nicotine may have repellent effect reducing trap catch.

Store in a cool dry place.

Shelf life can vary from 3-36 months depending on the storage temperature.