An important pest of plum, peach, cherry and other hosts belong to the family Rosaceae. This species is generally distributed in Europe, the Middle East and Asia (CIE 1978). This pest is also known as the red plum maggot and the plum fruit maggot (Zhang 1994). 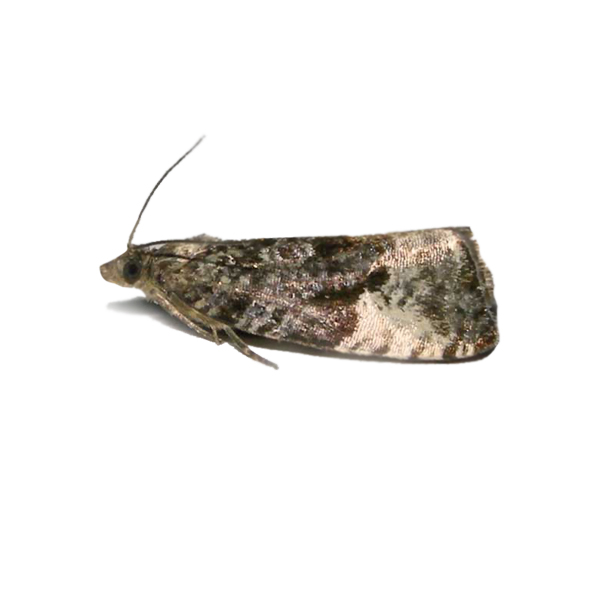 The wingspan is 13 to 15 mm, the forewings have a triangular shape narrow at the base, and the hind wings are brownish grey. There are two generation per year the moth appear from end of April to the beginning of June, most of the flights take place about 15 days after the plum trees flower. The second flights takes place end of June, laying occurs at intervals over 3 to 4 weeks, the eggs being deposited on the fruits which for the most part have finished growing.

Damage is predominately caused by first generation caterpillars, the dropping of the fruit being mistaken for physiological drop. The second-generation caterpillars cause important losses on the semi-late and late varieties. The attacked fruit takes on a dark coloration, ceases to develop and exudes a few characteristic gummy droplets through the caterpillars entry hole opening.

Russell IPM manufactures and supplies pheromone lure – the Qlure, traps and complete monitoring systems for Cydia funebrana, Plum Moth. Pheromone trap data gives early warning of the infestation and will also alert the user to a low level of population before it becomes serious. The lure can be best applied with the Mothcatcher trap or Delta trap.

Lures can be changed every 4-6 weeks to get the most accurate results. Lures handling Pheromone lures are a very sensitive tool. They can be affected by exposure to elevated heat and direct sunshine. Direct touching by hand may cause cross contamination leading to mixed catches in the trap. Some contaminants such as Nicotine May have repellent effect reducing trap catch. Lure Storage Store in a cool dry place. Shelf life can vary from 3-36 months depending on the storage temperature. See Technical Data Sheet for further details.