Helicoverpa zea (formerly in the genus Heliothis) is a serious agricultural pest. It is polyphagous in nature. 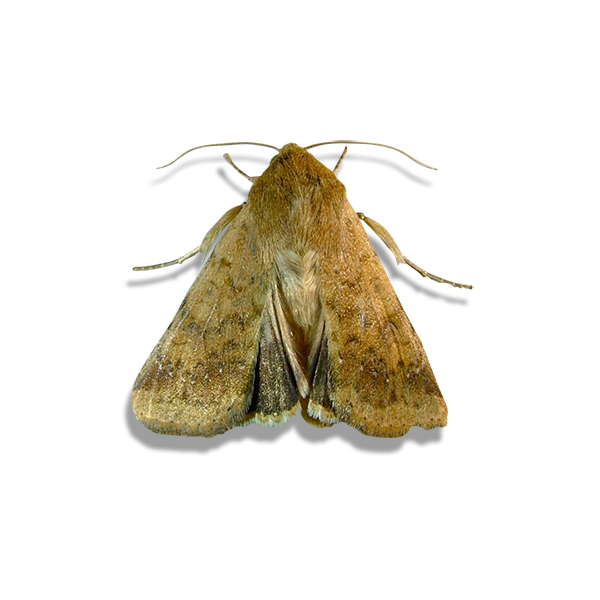 Adult female lay eggs singly, usually on leaf hairs and corn silk. The egg is pale green when first deposited, becoming yellowish and then gray with time. The shape varies from slightly dome-shaped to a flattened sphere, and measures about 0.5 to 0.6 mm in diameter and 0.5 mm in height. Fecundity ranges from 500 to 3000 eggs per female. The eggs hatch in about three to four days. Upon hatching, larvae wander about the plant until they encounter a suitable feeding site, normally the reproductive structure of the plant. Young larvae are not cannibalistic, so several larvae may feed together initially. However, as larvae mature they become very aggressive, killing and cannibalizing other larvae. Consequently, only a small number of larvae are found in each ear of corn. Normally, corn earworm displays six instars, but five is not uncommon and seven to eight have been reported. Mature larvae leave the feeding site and drop to the ground, where they burrow into the soil and pupate. The larva prepares a pupal chamber 5 to 10 cm below the surface of the soil. The pupa is mahogany-brown in colours, and measures 17 to 22 mm in length and 5.5 mm in width. Duration of the pupal stage is about 13 days (range 10 to 25) during the summer. As with the larval stage, adults are quite variable in colour. The forewings of the moths usually are yellowish brown in colour, and often bear a small dark spot centrally. The moth measures 32 to 45 mm in wingspan. Adults are reported to live for five to 15 days, but may survive for over 30 days under optimal conditions. The moths are principally nocturnal, and remain active throughout the dark period. During the daylight hours they usually hide in vegetation, but sometimes can be seen feeding on nectar. Oviposition commences about three days after emergence, continuing until death. Fresh-silking corn is highly attractive for oviposition but even ears with dry silk will receive eggs. Fecundity varies from about 500 to 3000 eggs. Females may deposit up to 35 eggs per day (Credits: J. L. Capinera, 2002, University of Florida, UF/IFAS).

On corn, young larvae tend to feed on silks initially, and interfere with pollination, but eventually they usually gain access to the kernels. They may feed only at the tip, or injury may extend half the length of the ear before larval development is completed. Such feeding also enhances development of plant pathogenic fungi. If the ears have not yet produced silk, larvae may burrow directly into the ear. On tomato, larvae may feed on foliage and burrow in the stem, but most feeding occurs on the tomato fruit. Larvae commonly begin to burrow into a fruit, feed only for a short time, and then move on to attack another fruit. Tomato is more susceptible to injury when corn is not silking; in the presence of corn, moths will preferentially ovipositor on fresh corn silk. Other crops such as bean, cantaloupe, cucumber, squash, and pumpkin may be injured in a manner similar to tomato. (Credits: J. L. Capinera, 2002, University of Florida, UF/IFAS)