Actiroll is the latest sticky roller trap from Russell IPM. The mass trapping tool was developed following continuous development of industry standard roller traps to find the most attractive colour wavelengths for whitefly and aphid management. 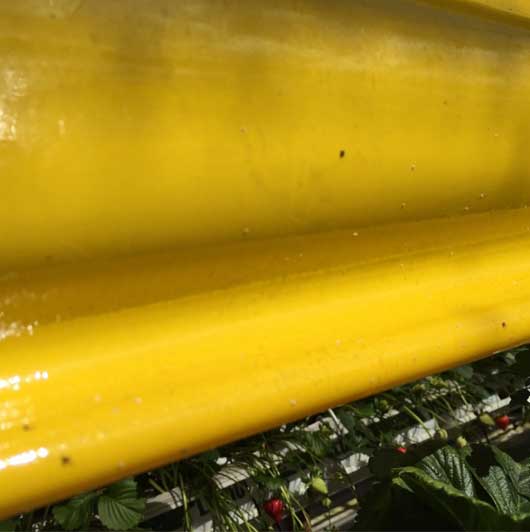 Suitable for temperate climates, Actiroll has been rigorously tested in commercial glasshouse crop and the improved material and colour of the traps has been scientifically proven to double the trap catch of whiteflies.

Furthermore, as pesticide resistance occurs rapidly in aphids and whitefly, the use of chemicals has resulted in further destruction than would have occurred without the treatment. Actiroll is the biorational solution that lessens the chemical burden on crops.

Studies have demonstrated that Actiroll yellow is most attractive to whitefly and aphid pests in greenhouses and polytunnels. Winged adults will be caught on the yellow sticky roller trap preventing the pests from feeding/sap-sucking and causing further damage to the crop.

This work is part of larger project conducted by Dr Clare Sampson of Keele University for the Knowledge Transfer Partnership. The project undertakes targeted research on the biology and behaviour of pests to optimise trap colour, pattern and scent to maximise trap catch.

Contact us to find out more. Always read the label and product information before use. Use all bio-products safely.