The box tree moth is a pest of box trees as well as other plant species in the buxaceae and some celastraceae species. Box trees are often found in homes and hotel grounds, historical gardens and churches. Box tree moth occurs in Asia, Europe and North America and has spread through trade of infested host plants. There are three or more generations per year depending on environmental conditions. The larvae overwinter in cocoons spun between its hosts leaves then emerge in spring. High numbers can cause complete defoliation and economic loss. These pests should be monitored with pheromone traps weekly during months when adults are in flight in order to time treatments and reduce crop damage. 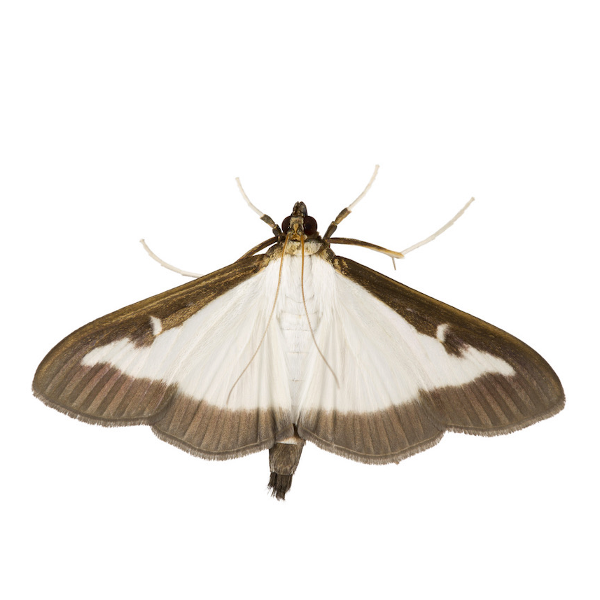 Adult: Adult wingspans can reach 40mm. These moths have two distinct patterns: either white forewings with a thick brown band along the outer edge and a white spot in the upper middle of the wing, or a fully brown forewing with the same white spot. Adults live for about two weeks and travel up to 10km annually.

Eggs: Eggs are laid in clusters of 5-20 in a gelatinous mass on the leaves of box tree.

Larvae: The caterpillars feed on the leaves, but may also attack the tree bark leading to the tree drying out and dying. They also form protective webbing which makes them difficult to control.  Larva have 5 to 7 stages, depending on temperature. Hatched larva can spread up to 20cm along the tree before pupating. Larvae are green with black heads, and have black spots surrounded by white along their segments. All larvae also have black stripes along their sides, which become more noticeable in later instar stages. Larvae can reach 40mm in length when mature.  Mature larvae enter a six to eight week winter diapause.

Pupae: Pupae are green with brown longitudinal lines when newly formed, gradually turning brown by the end of pupation.

Caterpillars cause damage to the flesh of leaves and leave webbing in the foliage. In more serious cases, they may fully skeletise leaves causing dieback and defoliation and even tree death.

Early detection of this damaging pest is provided by the Russell IPM’s pheromone lure and trap. Place the traps when adults are active, from April to October.

Act early to prevent an outbreak

Russell IPM manufactures and supplies a pheromone lure and traps for the box tree moth, Cydalima perspectalis. Trap data will give early warning of the infestation and alert the user to when adult moth population levels build up.

The following notes are general guidelines on implementing pheromone monitoring programmes. Local conditions and practices can vary, so please consult your local advisers for precise advise in your area.

Pheromone lures are a very sensitive tool. They can be affected by exposure to elevated heat and direct sunshine. Wear gloves to handle the lures as direct touching by hand may cause cross contamination leading to mixed catches in the trap. Some contaminants, such as nicotine, may have a repellent effect reducing trap catch.

The lures can be stored for long periods (several years) in a freezer (at about -20˚C) if the pack is sealed. Lures can also be stored in a fridge at higher temperatures (4˚C) for periods of up to 1 year. Although the pheromone is not harmful to humans, lures should not be kept in a freezer or fridge where food is stored.

Use 4 traps per hectare as a standard, increasing the trap density in areas of severe infestation.

Traps should be placed in an open area where the plants susceptible to attack are being grown. The traps should be mounted at a height of 1.5 to 2 metres above the ground.

Catches should be recorded weekly in low populations, increasing to twice weekly in fields with high populations.