Russell IPM manufacture and supply pheromone lures, traps and complete monitoring systems for Camerario ohridella, the horse chestnut leaf-miner. Accurate monitoring is essential to minimise damage and protect crops. Therefore, installation of pheromone traps will ensure you are alerted to the presence of unwanted pests at an early stage, detecting the insects before they become a major problem and enabling timely and effective treatment. 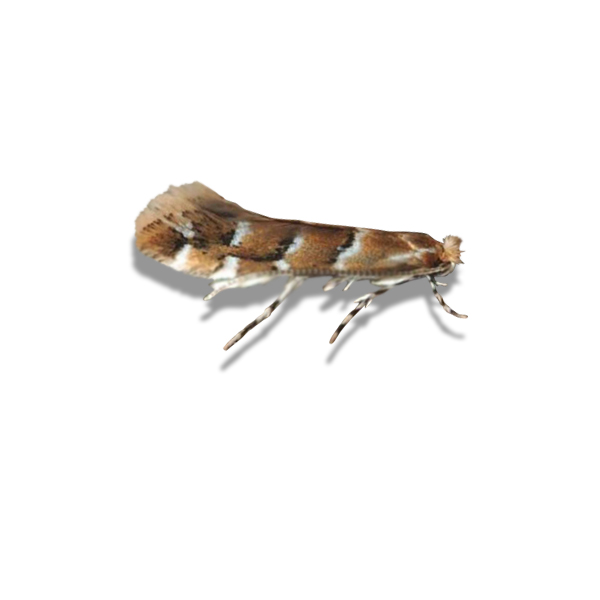 Each female horse chestnut moth can lay between 20 and 40 eggs which will be deposited on the upper surface of leaves. Eggs hatch around 2–3 weeks later, with the larvae developing through 5 phases of feeding followed by a spinning (prepupal) phase and a final pupal step. In the first stage the larvae will create a small mine that runs parallel to leaf veins which the larvae of C. ohridella will use to feed from sap. Mines can eventually grow to 8mm in diameter in the first stage but pass several centimeters following the instars.

Pupation will occur 4 weeks in with an adult emerging approximately 2 weeks later.

Moths are able to go through up to five generations each year, if the weather is hot and dry; on average in western Europe, C. ohridella goes through three generations per annum. The final generation pupates for over six month, overwintering in soil where it can survive temperatures as low as −23 °C.

Feeding by the horse-chestnut leaf miner can cause the leaves to die, resulting in dead, dried patches that looks similar to the damage caused by the fungus Guignardia aesculi.  However, the mines created by C. ohridella lack the yellow band observed in fungal infections of horse chestnut trees. The late summer leaf browning caused by the horse chestnut moth can result in a reduction in seed weight, photosynthetic ability and reproductive capacity.

Russell IPM manufactures and supplies pheromones, traps and surveillance systems for monitoring and management of Camerario ohridella, the horse chestnut leaf-miner. The data collected from pheromone traps can give an early warning of infestation and also alert the user to low populations before they become serious.

The following notes are general guidelines and intend to give users a head start in implementing pheromone monitoring program. Conditions and local practices may vary and may lead to program customization.

The MothCatcher trap is the most sensitive to use for the control of this insect trap. Do not use the monitor again to trap different insects as this can lead to mixed catches.

Place one pheromone trap per tree within the tree canopy.

Place within the foliage of the tree, at an approximate height of 2-2.5 m or within the tree canopy.

Collect weekly data from the beginning of the flight of over wintering generation. During the height of the most frequent reading population may be necessary. Decisions on the application of pesticides should not be taken solely on the trap catch data. Climatic and biological considerations are taken into account.

Preference–performance relationships are thought to be particularly important for sessile herbivores, such as leaf miners, whose choice of host plant is entirely determined by the ovipositing female. However, this relationship has seldom been examined between a non-native herbivore and non-native host plants. Leaf damage and oviposition patterns by the invasive horse-chestnut leaf miner, Cameraria ohridella Deschka & Dimic, 1986 (Lepidoptera: Gracillariidae), were investigated on 11 different species of Aesculus L. (Sapindaceae) at the Royal Botanic Gardens, Kew. The tree species studied were of different continental origin and belonged to four different sections of the genus Aesculus. Oviposition was recorded on all the investigated species of Aesculus, with egg densities being greatest on Aesculus hippocastanum L. and Aesculus turbinata Blume. By contrast, mines were formed on only six out of the 11 studied species. Host suitability for C. ohridella was related to the phylogeny of the genus Aesculus. Species belonging to the section Aesculus were susceptible to the leaf miner; species in the section Pavia showed variable susceptibility; and species in the section Calothyrsus and Macrothyrsus were found to be resistant.

The study addresses two hypotheses, and found that (1) the levels of damage caused to leaves of the horse-chestnut tree, Aesculus hippocastanum, and (2) the level of attack by parasitoids of C. ohridella larvae were both greatest where C. ohridella had been present the longest. Specifically there was a rapid rise in leaf damage during the first three years that C. ohridella was present and only a slight rise thereafter, while estimated rates of parasitism (an index of true rates of parasitism) increased from 1.6 to 5.9% when the time C. ohridella had been present in a location increased from 3 to 6 years. We suggest that this increase is due to recruitment of native generalist parasitoids, rather than the adaptation or host-tracking of more specialized parasitoids, as appears to have occurred elsewhere in Europe. Most data collected by participants were accurate, but the counts of parasitoids from participants showed lower concordance with the counts from experts. We statistically modeled this bias and propagated this through our analyses. Bias-corrected estimates of parasitism were lower than those from the raw data, but the trends were similar in magnitude and significance.