Plusia chalcites is the serious pest of tomato, tobacco, cotton, crucifers, and legumes.

The Common names are golden twin spot, tomato looper; green garden looper. The synonym of this species is Chrysodeixis chalcites. It is geographically distributed in across the Europe, North Africa, Middle East, South East Asia, Australia and New Zealand. The high level of infestation is known to be established in green houses or poly-tunnels protested vegetables and decorative plants in Morocco, Bulgaria, other North African and Mediterranean countries. 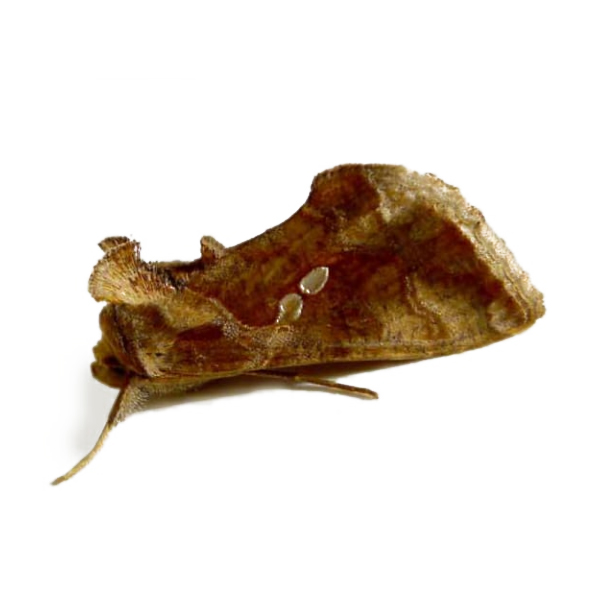 Eggs are laid one at a time or in small groups on a wide range of substrates. Larvae will often drop from the leaf and hang on a silken thread when disturbed. Pupae are green with a brown dorsum, or are totally brown, and are usually attached to the underside of leaves or any suitable substrate in a silken cocoon. Adults rest with the wings folded over their back in a “tentlike” arrangement. The adult of C. chalcites is relatively easy to screen for in trap samples. The forewing has two silver spots, or stigma, which are oval in size . The ground colour of the forewing is usually golden, hence the common name golden twin spot is very appropriate (according to USDA / APHIS / PPQ PEST ALERT).

Early instar larvae are leaf skeletonizers, which means that they eat only a portion of the leaf to form an irregular network of minute clear areas. Later instars eat the entire leaf, at most leaving the midrib, or other veins. Larvae move like inch-worms, looping along, because they appear to have only two abdominal prolegs. They may also move back and forth in an arc before moving forward, almost as if they were “testing” each area before walking again. A few specimens may show a bronze-coloured forewing but the twin spots are still present. The soybean looper is most likely to be confused with C. chalcites but the male genitalia are very different.