Plutella xylostella, the diamond-back moth feeds on the leaves of certain types of vegetables including cabbage. It is distributed throughout the USA, Canada, Australia, Asia and the Middle East.

It is has become an emerging problem in the United Kingdom with reports of the moth reaching ‘plague proportions’ in farms where cabbages are grown.

The diamond back moth, Plutella xylostella is a serious insect of cabbage, kale, rapeseed, broccoli, turnip and cauliflower. On young seedlings the growing point of the plant may be damaged, often resulting in the death of the plant. 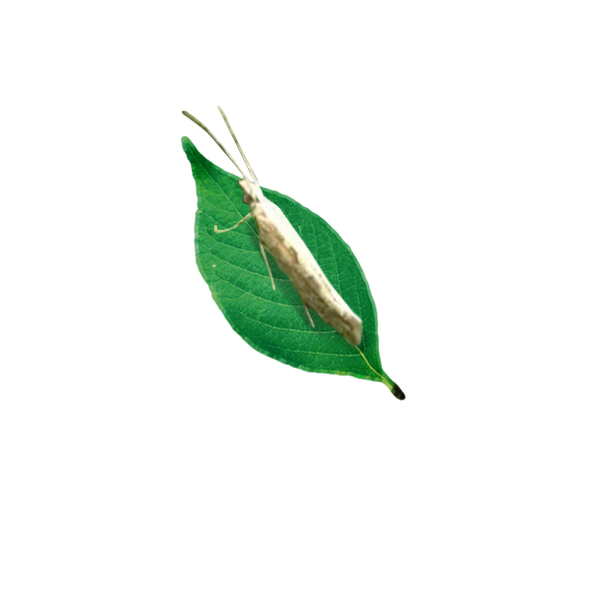 Three to six generations of P. xylosetella occur per year in various agro-ecological zones. The moths emerge from the over-wintered pupae at the end of May. The second flight occurs at the end of June; where the moths are more numerous and, in July and August, damage is greater. In autumn, the caterpillars spin cocoons for themselves denser than the spring and summer cocoons and then enter hibernation.

The caterpillars of the diamond back moth feed on the leaves, usually on the undersides, eating into the tissue, leaving only veins and the upper epidermis, giving the leaves a windowed appearance, which grow in size, eventually forming holes as the leaves grow and the dead tissue tears. On young seedlings, the growing point of the plant may be damaged, often resulting in death of the plant. In older plants new shoots are produced and the attacked plants produce several small heads of little value.

The Delta trap is most sensitive trap to use for monitoring this insect. However, Russell IPMs Moth catcher may be used in dusty conditions or in areas with a high moth population density. Do not re-use the trap to monitor different insects as this may lead to mixed catches.

Ferolite can also be used for trapping the diamond back moth. This innovative moth trap combines light and pheromones to maximise trap catch. The trap is able to capture both the female diamond back moths as well as the male, providing an increased level of control when compared with gender specific monitoring devices.

Russell IPM manufactures and supplies pheromones, traps and surveillance systems for the complete control of the diamond back moth, Plutella xylostella. The data collected from pheromone traps can give an early warning of infestation and also alert the user to low populations before they become serious.

The following notes are general guidelines and intend to give users a head start in implementing pheromone monitoring program. Conditions and local practices may vary and may lead to program customization.

The Delta trap or Mothcatcher trap are the most sensitive to use for the monitoring and trapping of Plutella xylostella. A diamond back moth pheromone should be used in conjunction with the trap to maximise pest catch.

It is recommended to place approxmately one trap every 10 hectares and at least 50m apart for the monitoring or Plutella xylostella.

Plutella xylostella pheromone traps should be placed at the highest part of the crop to be monitored. In brassica a height of at least 1m is preferential. Pheromone traps can be hung from branches or from posts placed in the ground.

Collect weekly data from the beginning of the flight of over wintering generation. During the height of the most frequent reading population may be necessary. Decisions on the application of pesticides should not be taken solely on the trap catch data. Climatic and biological considerations are taken into account.

This study was conducted to estimate the economic injury level (EIL) to leaf broccoli (leaf vegetable) by the diamondback moth (Plutella xylostella) in 2007 and obtain basic data for pest management. To investigate the relationship between initial density of diamondback moth larvae and broccoli leaf yield, experimental plots with five treatments (0, 0.5, 1.0, 1.5 and 2.0 larvae per plant) as initial density were established. We inoculated larvae on cheesecloth covering to survey changes in larval density. When grown for consumption, leaves of broccoli are harvested in periods. High levels of larvae were associated with significant reductions in leaf yield. There were 0%, 15%, 35%, 42%, 44% yield reductions due to a density of 0, 0.5, 1.0, 1.5, 2.0 diamond back moth larvae per plant, respectively, 25 days after larva inoculation. The regression equation used to predict leaf yield based on the number of initial larvae per plant was y = 1636-394x(>). EIL of the diamondback moth on leaf broccoli was 2~3 larvae per 10 plants for a damage level of 5%. The economic threshold was 1~2 larvae per 10 plants. Thus, diamondback moth management should be initiated when 1~2 larvae appear on 10 plants.

Agricultural intensification and greater production of Brassica vegetable and oilseed crops over the past two decades have increased the pest status of the diamondback moth (DBM), Plutella xylostella L., and it is now estimated to cost the world economy US$4–5 billion annually. Our understanding of some fundamental aspects of DBM biology and ecology, particularly host plant relationships, tritrophic interactions, and migration, has improved considerably but knowledge of other aspects, e.g., its global distribution and relative abundance, remains surprisingly limited. Biological control still focuses almost exclusively on a few species of hymenopteran parasitoids. Although these can be remarkably effective, insecticides continue to form the basis of management; their inappropriate use disrupts parasitoids and has resulted in field resistance to all available products. Improved ecological understanding and the availability of a series of highly effective selective insecticides throughout the 1990s provided the basis for sustainable and economically viable integrated pest management (IPM) approaches. However, repeated reversion to scheduled insecticide applications has resulted in resistance to these and more recently introduced compounds and the breakdown of IPM programs. Proven technologies for the sustainable management of DBM currently exist, but overcoming the barriers to their sustained adoption remains an enormous challenge.